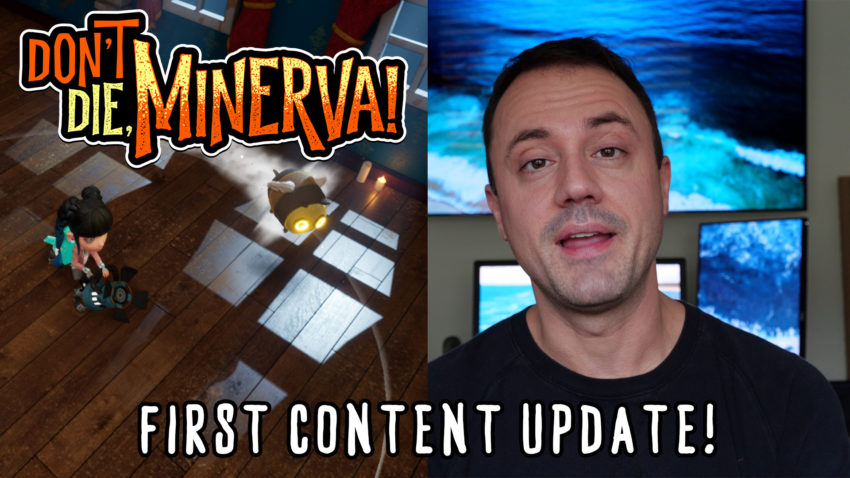 Hi Everyone! Although it’s been less than two weeks since we launched Don’t Die, Minerva! into Steam Early Access and Xbox One Game Preview, we’ve been busy little bees here at Xaviant and we’re ready to announce our first content update, which is coming this Wednesday, December 18th!

You can see and hear a lot about the update in the video diary above, but we’re also happy to provide more detail here for those who prefer the written word. In keeping with the spirit of the video, here are the nine major components of the update:

9. Bug fixes! Game Preview and Early Access generally means there are still some bugs lying around, and we’ve taken the opportunity to squash a bunch of them. We’ll be including detailed patch notes when we launch the update, so you can find a full list then. If you do run across something that’s particularly bothersome, please let us know so we can make sure we have it on the list.

8. New Rooms! Don’t Die, Minerva! is still very much a work in progress and we are adding variety everywhere we can. One of our biggest pet peeves is seeing the same room twice during a run, so we’ve added twelve new rooms to the mix to make sure that is less likely to happen. We’ve also changed the way challenge rooms work – you’ll now see them in every level, but the associated Essence unlock determines whether they will have a chance to reward you with treasure.

7. New Affixes! Affixes are the bread and butter of our procedural loot system. All of the stats you see listed on a piece of gear are affixes. That includes things like movement speed on boots, bonus attack speed on a flashlight, or increased range on a Friendly. We’ve added 15 new affixes to the mix, with a focus on Mods and the status effects they apply. We’ve also shuffled around which affixes appear on which loot. The net result is the loot in the game is far more varied and creates much more interesting decisions about how to build Minerva for a particular run.

6. Combat Balance! There are hundreds of elements feeding into how the game feels to new and veteran players alike. How enemies scale in terms of hit points and damage output from level to level and from one difficulty setting to the next. The number of enemies within a wave, which enemies are found in which level, and in which proportion. How your gear scales from level to level. And that’s just the tip of the iceberg! We’ve been watching, listening, tweaking, and testing, and we are very happy with the results. The game feels faster and more fun. There’s more of a ramp at the start of a run, but things still get hectic by the end. We can’t wait for you to tackle it!

5. Essence Economy! Essence crystals allow you to purchase permanent unlocks that improve your ability to play deeper into the game. Based on our observations and your feedback, we’ve re-tuned the economy to give you crystals at a faster rate and reduce the cost of many essential items. With reasonable time investment you’ll find yourself unlocking skills that enable you to take on the biggest challenges the game has to offer.

4. Legendary Loot! Legendary items are the cornerstone of any build, and we want you to have a very special fizzy feeling in the pit of your stomach whenever you see that tell-tale orange glow and hear Minerva gasp in delight when one drops. We realized that we were just being too cautious with how we scaled the power of Legendary items, and as a result we were leaving a lot of fun on the table. With this update we’re swinging for the fences, and most Legendary affixes have been turned up to eleven! Case in point: Movement speed now maxes out at a 100% bonus instead of 30%. If a set of Legendary boots drops with that affix, you’re about to have a wild roller-coaster ride. Does it guarantee you’ll go all the way to the final boss in that run? Absolutely not. Does it guarantee you’ll have a great time trying? We sure think so!

3. Price Drop! We are so appreciative of everyone who has purchased the game so far and supported us at launch! It really means the world to us. At the same time, we’ve heard from many of you that the launch-day pricing was a little too steep. You talk, we listen! Effective on Wednesday when the update rolls out, we’ll be setting a new price of $12.99 (That is in the U.S., this will vary from region to region).

2. New Flashlight: Orb Launcher! That’s right, there’s a brand new flashlight in the loot list and it is amazing! You can charge and release to lob shots across the room, and they let out a powerful explosion where they land. You are free to spam at close range, but that’s not how you’ll maximize damage – if you want big output you’ll need to fully charge your shots – which takes serious skill!

1. New Friendly: The Bee! This little guy represents an all-new take on what a Friendly can… bee 🙂 While many Friendlies are fire-and-forget – just place them on the battlefield and they’ll do the work – the bee requires care and attention to be effective. When you deploy him, he swings around you like a morning star, and you need to position Minerva just right to ensure that his attacks will land. He also has a small battery, which means you’ll need to redeploy frequently to maximize his effectiveness. Using the Bee properly along with a flashlight takes a certain kind of player, and we hope that’s you!

More details will be included in patch notes along with the update on Wednesday. We hope you’re all as excited as we are! Check out the video above to see footage of many of the new items in action.