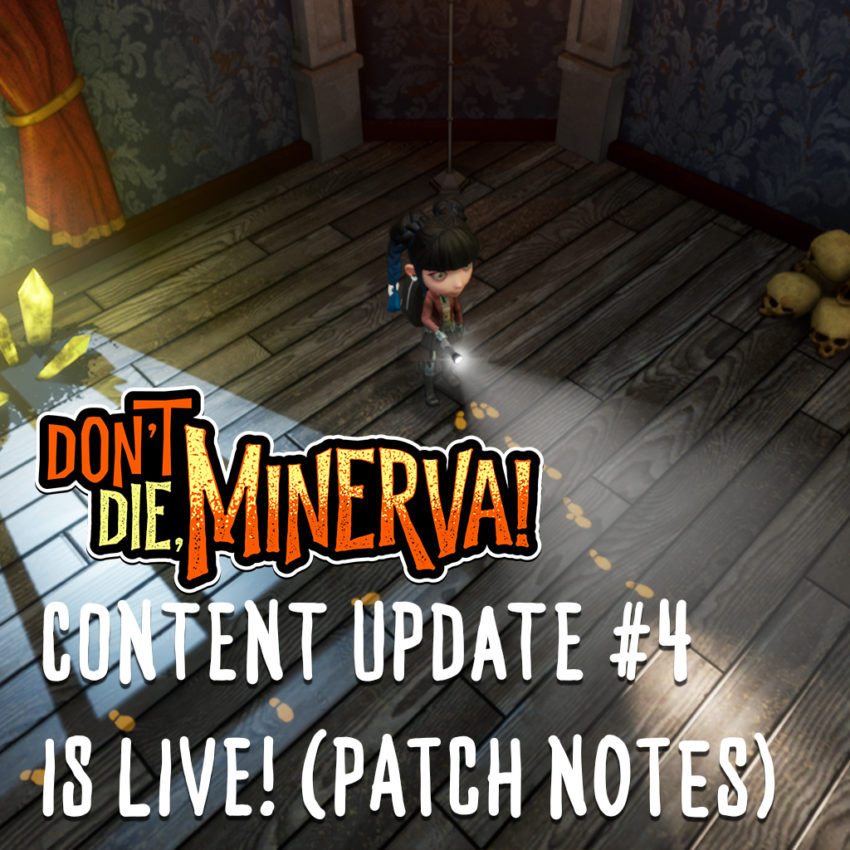 We hope this message finds you well. This is a tough time for everyone, and our team is grateful to report that we are safe and healthy with our families at home. We’re still able to operate, so we’ll keep doing our jobs. If we can provide a bit of entertainment for some of you out there, we see that as doing our part.

Our 4th content update for Don’t Die, Minerva! launches today, Friday March 27th, for Steam PC and Xbox One, and should be available by the time you read this.

As we announced back in January, we have exciting plans on our roadmap for Minerva, and today we’re rolling out one of the biggest new features: Abilities.

Until now, Minerva has only directly wielded one category of weapon, flashlights, and has otherwise relied on her Friendlies to battle ghosts. In the interest of adding depth and variety to combat, we’ve created 5 Abilities (including a default melee Flashlight Smash) that Minerva can perform in the midst of combat. At intervals you’ll find special new rooms in the dungeon that will allow you to swap out your equipped Ability and try something new.

Speaking of combat, we’ve also made some major changes on that front. Not only have we done a great deal of balancing, tweaking, and fixing, but we’ve completely overhauled our spawning system and added a whole new class of enemies to the mix.

As we’ve said before, our original vision for the game was to imagine what it would be like if you could compress the entire Diablo experience into a single hour (well, maybe two hours). Of course there are implications in terms of loot delivery and game structure (hence the rogue-lite approach), but we realized that we were falling a bit short in terms of combat feel. We want a big part of the fun to be putting together a build that allows you to smash your way through packs of enemies, and have the satisfaction of seeing massive carnage on the screen.

We’ve done a great deal of work to try to achieve that feel. The result is definitely a milestone along the way, not the final result, but we like where it is heading and we hope you will too!

There’s a lot more in this update, including a heap of new loot affixes, bug  fixes, and general polish. You can read about it below. We can’t wait to hear what you think about it, so let us know on Twitter!